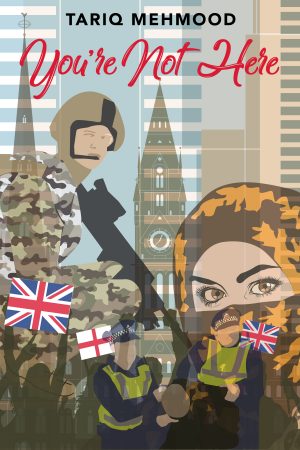 One brother goes missing in action in Afghanistan, the other falls in love with an Afghan girl in England.

To the disgust of his white friends, 17-year-old Jake Marlesden, whose brother is missing in action in Afghanistan, is in love with Leila Khan, an Afghan. When Jake tries to find out what happened to his brother, neighbour turns against neighbour and lover against lover.

Leila joins young Muslims protesting against the returning bodies of dead British soldiers, and Jake stands with the families of the soldiers. The lovers fall apart.

But far off events, and sinister forces at home, bring the lovers together again in a journey in which they will not only discover themselves, but also heal the wounds of their families and friends.

This is the sequel to You’re Not Proper.

Set in and around Manchester, You’re Not Here is informed by Mehmood’s experience of growing up a working class Pakistani in northern England, combatting racism on the streets and being arrested. The novel explores the British Asian experience in the context of the “war on terror” and Islamophobia. “I have lived and fought against various waves of racism in Britain, but the current Islamophobic one, the new racism, is far more insidious and divisive than those which preceded it,” says Mehmood in his blog.

This novel is a sequel to You’re Not Proper, which explored, in the author’s words, “what it is to be a Muslim teenager in the west today”. While it featured two teenage women’s search for identity and belonging — one with a Pakistani father and white Christian mother, the other her Hijab-wearing school friend — Mehmood’s sequel is, interestingly, told from the point of view of a white working class British youth.

Jake’s father was in the army. His elder brother is missing in action in Afghanistan. Jake is in love with a Muslim girl. We are introduced to diverse Asian characters and to white racist friends of his brother, and to the tensions both within and between the two communities, through Jake’s eyes.

While the novel reads like a pacey thriller, the teenage love story is treated with convincing tenderness. And there is sympathy for British soldiers. One scene features physically and mentally scarred ex-soldiers discarded by the state, and Military Friends and Families Against War make an appearance.

The narrative is packed with authentic voices, often humorous observations and insights, The novel reads like a thriller. It reaches an action-packed and moving climax, but, unlike a thriller, we are left uneasy about what may happen next.
Helen Goodway, Red Pepper, Summer 2019

Tariq Mehmood is an award winning novelist and documentary film-maker. His first novel, Hand On the Sun (London: Penguin Books, 1983), dealt with the experience of the resistance to racism by young migrant to the UK of the 1970s and…