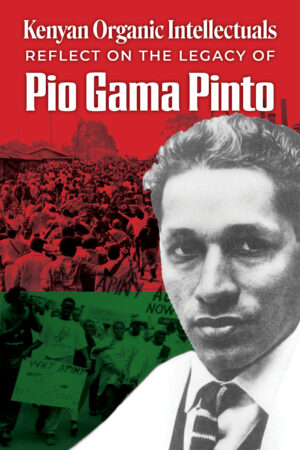 Launch of the book in Nairobi!

Red salute to the organic intellectuals of Kenya for putting together their reflections in this absolutely fascinating compilation. As I read it, I want to read more and [the] more I read my appetite to “meet” our unsung heroes in this part of Africa deepens. https://t.co/wcLHssuiBT

Pio Gama Pinto has long been the ‘unsung martyr ‘ in Kenya’s revolutionary history. It is a real mark of the consciousness of the new generation of organic intellectuals from the social justice centres that they chose to read, discuss, critique, and write about Pinto. A must read! —Dr. Willy Mutunga, Chief Justice & President of Supreme Court, Republic of Kenya, 2011-2016

I am inspired by reading your thoughts. Pio has shown you how: Constancy in your ideals.
Perseverance in your actions. Use every opportunity to further justice. Use every opportunity to subvert injustice. Speak out. Always place the Alternative before the people. Find what is already available, small or big, to further social justice. Much is already in the Constitution and laws. Enforce it. Pio created political space from blank walls and barbed wire.  Finishing your book, I felt renewed. I thank you.
– Pheroze Nowrojee, Senior Counsel, author of Pio Gama Pinto, Patriot for Social Justice (2007).

This booklet on Pio Gama Pinto has been produced in the tradition of ‘looking back, in order to move forward’ to not only salvage history but also to use it as a mirror to reflect on the current political, economic and social conditions in Kenya. The essays, dubbed reflections, that appear in the booklet are a product of the efforts and dedication of young women and men under the banner of the ‘Organic Intellectuals Network’ in Kenya. We use the concept of ‘organic intellecutal’ as developed by Antonio Gramsci.

Members of the Organic Intellectual Network selected the book Pio Gama Pinto: Kenya’s Unsung Martyr 1927-1965 by Shiraz Durrani (Vita Books, 2018) as a basis for discussion for celebrating and remembering the life of Pio Gama Pinto, Kenya first Martyr, a dedicated and selfless individual in the struggle for freedom in Kenya. Pinto has not been fully appreciated and recognized for his efforts in the fight for independence and post-independence struggles that were characterized by ideological confrontation between capitalism and socialism. Each of the 14 participants in the discussions were asked to write their reflections on what they had learned, based on their daily struggles as activists, students and revolutionary community organizers in their communities. These discussions were accompanied by several activities at the beginning of 2021 to remember Pio Gama Pinto on the 56th anniversary of his assassination in 1965. These activities included reflections at his memorial grave and the production of a Pio Gama Pinto podcast.

The short book aims at retrieving and providing a genuine national direction for the struggles of Kenyans based on historical clarity devoid of any obscurity and distortion. It is our hope that these simplified reflections will introduce Pio Gama Pinto and socialism to the Kenyan people and across the world.