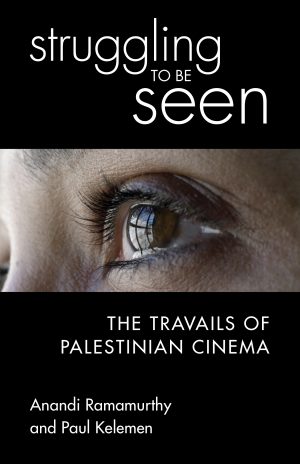 Struggling to be seen: The travails of Palestinian cinema

The book explores the challenges Palestinian filmmakers confront to develop a cinema that gives expression to the national narrative. It is based on collaborative research involving Film Lab Palestine, Sheffield Palestine Cultural Exchange and Sheffield Hallam University. We explore the political, economic and cultural contexts that impact on Palestinian film production and some of the barriers encountered in profiling and screening Palestinian films, to shed light on the complex terrain that is traversed to sustain and develop a film industry and film culture in historic Palestine and beyond.

Praise for Struggling to be seen

To so nimbly and elegantly traverse Palestinian time and space is itself a defiance of the occupation’s brutally enforced barriers. The authors’ unstintingly political examination of Palestinian cinema has much to offer both those in the know and readers new to this extraordinary body of work. — Kay Dickinson, Professor, Film Studies, Concordia University

Working extensively through primary sources, conducting research and interviews across generations of Palestinian filmmakers, the authors offer the reader an ambitious and wide-ranging essay which charts the development of a national Palestinian cinema, from an historical and critical perspective. By exploring the constellation of political, social and aesthetic concerns that shape this cinema, this authors challenge us to rethink the stakes behind the contemporary development of a Palestinian cinema industry, its audience reception, in historic Palestine and beyond.— Samia Labidi, cultural programmer & artistic curator

Illuminating and compelling, Struggling to be Seen lays bare the historical, enduring but also emerging (colonial and neocolonial) obstacles to the development of a film industry and film culture within the West Bank and Gaza. Though familiarly sobering (in its re-confirmation of the scale of injustice facing Palestinians), the book provides up-to-the-moment and an interdisciplinary account that provides rich, fresh terrain that reveals new and exciting progressions within Palestinian film culture. —Michele Aaron, Reader in Film and Television, University of Warwick, author of Death and the Moving Image: Ideology, Iconography and I (Edinburgh Univer- sity Press, 2014) Director, Screening Rights Film Festival.

Struggling to be Seen is a must read for those who are interested in under- standing the multilayered challenges that face Palestinian cinematography from its production phase to its screening phase. The book is a short read which takes the readers through the different stages which shaped the Palestinian film making enterprise. Struggling to be Seen shows the restrictions that Palestinian filmmakers face from the initial stages to funding and screening. The authors tell a story of a people whose sense of self-reflection is suppressed by the Israeli oppressive machine which con- stantly works at erasing the Palestinian peoplehood, detaching it from its past.— Nahed Habiballah, Assistant Professor and member of the Board of Directors of Policy and Conflict Resolution Studies Center, Arab American University, Ramallah, Palestine

Paul Kelemen b.1946 taught at Manchester University School of Social Sci- ences from 1976 until he retired in 2014. He has written mainly on colo- nialism and the labour movement and is the author of British Left and Zionism, History…