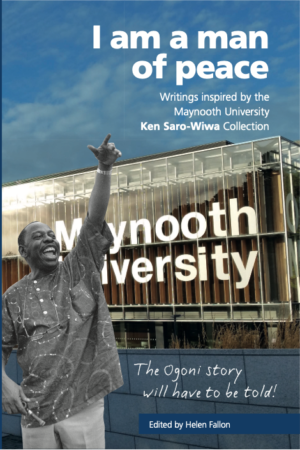 I am a man of peace: Writings inspired by the Maynooth University Ken Saro-Wiwa Collection

This book marks the 25th anniversary of the execution of Nigerian activist and written Ken Saro-Wiwa. The 21 essays, by international contributors, and 42 poems by new and established poets, are inspired by his ideals and activism.

The volume includes contributions by people intimately connected with Saro-Wiwa. His brother Dr Owens Wiwa recounts how his older brother awakened and nurtured his awareness of the tremendous damage Royal Dutch Shell was doing to their homeland, in collaboration with the then Nigerian military government. His firsthand account of the brutality of the military government and its impact; his unsuccessful efforts to save the life of his brother; his time in hiding and subsequent escape, with his family, from Nigeria and his efforts to retrieve the remains of his brother for burial, makes for very moving reading. Likewise, Noo Saro-Wiwa shares her story of growing up in England with strong links to family in Nigeria, and the trauma of hearing of her father’s execution while at University.

Maynooth University, where the editor works as Deputy Librarian, holds the death row correspondence from Ken Saro-Wiwa to Sister Majella McCarron. McCarron provides two personal essays. One, a reflection on the events that shaped her work with Saro-Wiwa in Nigeria and her subsequent efforts to save the lives of the Ogoni 9: the second essay explores her experience as a table observer of the Shell to Sea campaign, which strove to have gas, discovered off the west coast of Ireland, refined at sea rather than inland.

The damage that Shell has caused in Ogoni and the issue of redress are topics addressed in essays by experts including Mark Dummett, of Amnesty International, who investigated how Shell and other oil companies have caused or contributed to human rights abuses through their operations in the Niger Delta. Daniel Leader, a barrister and partner at Leigh Day’s international law department, the firm who have led a number of ground breaking human rights cases, including a series of cases against Shell on behalf of Nigerian communities, explores the issue of legal redress. Architect, environmental activist, author and poet Nnimmo Bassesy’s wide ranging essay presents Saro-Wiwa as activist and writer and creator of the Ogoni Bill of Rights, against the backdrop of the UNEP report of the Environmental Assessment of Ogoniland, which recorded that drinking water in Ogoni had benzene, a carcinogen, at over 900 times the level permitted

I welcome the publication of this volume which highlights the work of Trócaire and other people and organisations
to fight for a more just world. Trócaire campaigned strongly for the release of the Ogoni 9 and continues to campaign for justice in the face of state and corporate violations of human rights. The writings of Ken Saro-Wiwa and those inspired by his work keep the flame of justice lit.

The publication of I am a Man of Peace: Writings Inspired by the Maynooth University Ken Saro-Wiwa Collection highlights the shift towards peaceful protests as a means to a more sustainable end. It is a justification that one’s dreams for the greater good can still be attained without bloodshed. Ken preached, lived, and practiced peace in his search for justice even in the face of stiff opposition. Years after his death, Ken’s ideologies and philosophies have proved relevant today.

Sister Majella McCarron’s choice of Maynooth University for this unique donation was particularly appropriate, given the University’s long involvement with issues of inclusion and justice in Ireland and abroad. This deep-rooted commitment is today articulated in our University Strategic Plan, where a strategic goal is ‘to build on our achievements to date and become a model University for equality, diversity, inclusion and inter-culturalism, where social justice, addressing inequality and empowering people are central to our mission.’ This book makes a significant contribution to that goal.

Writing can urge us to pause, to think, and to discover what we really want to say. Sharing that writing calls for courage and support. In this publication, as Jessica Traynor suggests, we see the evidence of a new generation of Irish and new Irish citizens engaging with complex issues through poetry. Reading their poems, we may begin to understand more about each other and ourselves. By bringing together these Irish and new Irish voices the book contributes to building a shared discourse which is essential for trust, community and hope.

Dr Alison Farrell, Founder of the Summer Writing Institute For Teachers (SWIFT) and Co-founder Irish Network for the Enhancement of Writing (INEW)

Helen Fallon is Deputy Librarian at Maynooth University. She has previously worked at Dublin City University and the University of Sierra Leone. She has published ex- tensively and presents workshops on writing for academic publication nationally and internationally. She edited…