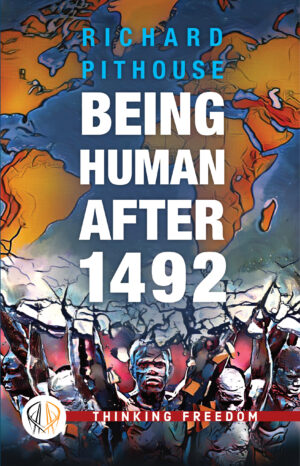 Richard Pithouse’s extraordinary overview of the what is means to be human after 1492:

… On 9 August 2014, Michael Brown, an unarmed black man, was shot dead by a white police officer in Ferguson, Missouri. The movement that grew out of the rebellion that followed inaugurated a new sequence in the struggle against racism in the United States. As with previous sequences in that struggle it quickly acquired an international dimension, including here in South Africa. One aspect of this international moment has been an urgent confrontation with the reality that what Césaire called ‘abstract equality’ does not, on its own, mark an end to the racialization of life.

In the United States, and elsewhere, there is a sense that history is as present as it is past. Just over a decade ago, Baucom observed that “what-has-been is, cannot be undone, cannot cease to alter all the future-presents that flow out of it. Time does not pass or progress, it accumulates”. It is the sense that time accumulates into the present that has often led to the invocation of William Faulkner’s famous line from Requiem for a Nun in discussions about race: “The past is never dead. It’s not even past.”

The past does not merely haunt or shape the present via the enduring power of deep and impersonal structural forces. Across Europe, and in settler societies like Australia, Brazil and the United States, racism is an increasingly explicit and menacing presence at the centre of political and social life. White revanchism has rallied, often under demagogic leadership, to secure the racial order that emerged from the event of 1492. It has already resulted in Brexit in England, the impeachment of an elected President in Brazil and the election of a figure as grotesque as Trump in the United States.

We will not be able to transcend the epoch that began in 1492 without a politics that can confront and defeat this revanchism. And we will not have transcended this epoch until “things, in the most materialistic meaning of the word” are, as Fanon insists, “restored to their proper places”. But the catastrophe from which we are all derived is not solely a matter of material dispossession and accumulation. As Michael Monahan argues, in conversation with Wynter, “the history of colonialism is also the history of the emergence of the idea of Europe and of Europeans, and . . . it is such ideas and cultural practices that inevitably shape our consciousness, conditioning what counts as normal and, ultimately, as rational”.

Richard Pithouse is a Research Associate at the Wits Institute for Social & Economic Research at the University of the Witwater- srand, the editor of New Frame and the Coordinator of the Johan- nesburg office of the Tricontinental: Institute for…