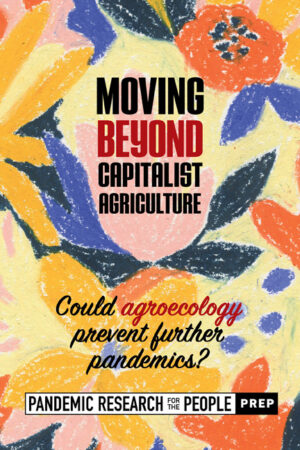 Moving Beyond Capitalist Agriculture is born out of the coordination between scholars and community organizers and it should be shared widely. The group behind it, the Pandemic Research for the People, is an expression of collective wisdom and necessary unease. In fact, organization and solidarity are two values to be cherished in this moment of multiple crises. COVID-19 is a neoliberal disease and agroecology that frees the land and people of greed and towards food sovereignty is the pathway out of this mess. — Saulo Araujo, US Friends of the Landless Workers Movement

If you want to know more about the connections between racial capitalism, industrial agriculture, environmental destruction, and epidemics and pandemics, then this is a great place to start. But this pamphlet is more than just an analysis of the immense problems generated by capitalism. More importantly, this pamphlet represents an attempt to overcome this system and to develop revolutionary alternatives to it. Rather than falling into the tempting illusion of reform, the authors of these texts give invaluable insights into how we might support and develop revolutionary forms of agro-ecology that can sustain and reproduce life outside of the racial capitalist machine that is destroying it.” — Arturo Castillon, co-author, The Revolutionary Meaning of the George Floyd Uprising

Increasingly threatening climate disaster coinciding with a pandemic has tragically illustrated that the world doesn’t have the luxury of dealing with one crisis at a time – and capitalist agriculture is at the root of both. The authors show convincingly that there is a better way: one that’s based on self-determination and building on human cooperation, not competition. This publication makes a strong case for agroecology as a crucial part of a future that puts people above profit; a future that assures people`s health by allowing planetary health to flourish. It will bring clarity to everyone trying to understand how the next pandemic could be averted whilst building a more just world — Vijoleta Gordeljević, Health economist and environmental health policy expert, People’s Health Movement.

Pathogens repeatedly are emerging from a global agrifood system rooted in inequality, labor exploitation, and unfettered extractivism by which communities are robbed of their natural and social resources. A crisis-prone economic system that prioritizes production for profit over meeting human needs and ecological preservation is organized around intense monocultural production that, along the way, allows the deadliest of diseases to emerge. The Pandemic Research for the People (PReP) focuses on how agriculture might be reimagined as the kind of community-wide intervention that could stop coronaviruses and other pathogens from emerging in the first place. We address how mainstream science supports the same political and economic systems that helped produce the pandemic. Then we introduce agroecology, an environmentalism of the peasantry, the poor, and indigenous, long in practice, that treats agriculture as a part of the ecology out of which humanity grows its food. Agroecology—a science, movement, and practice—combines ecological science, indigenous and peasant knowledges, and social movements for food and territorial sovereignty to achieve environmentally just food systems.

Peasant- and indigenous-led agroecology is uniquely positioned to limit the spread of zoonotic viruses: Post-capitalist agroecology champions the indigenous and smallholders who protect agricultural biodiversity. A diverse agroecological matrix of farm plots, agroforestry, and grazing lands all embedded within a forest can conserve animal biodiversity in the landscape. Agricultural biodiversity can make it more difficult for zoonotic diseases to prevail. Such a mode of conservation also takes into account the economic and social conditions of people currently tending the land, rather than a conservation that uproots people to foster the private accumulation of capital.

Pandemic Research for the People

Pandemic Research for the People (PReP) is a crowd-funded effort aimed at conducting research on questions that will directly help communities around the world during the ongoing COVID-19 pandemic. Alexander Liebman is a PhD student in human geography at Rutgers…