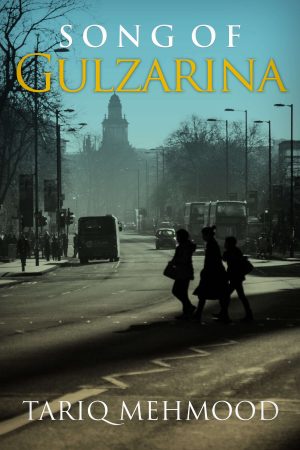 A suicide bombing is being planned in a residential street in Manchester. Behind it lie Saleem Khan’s vivid memories – some full of regret and yearning, others humorous and yet others overshadowed by the surreal brutality of the war in Afghanistan.

Tariq Mehmood is an award winning novelist and documentary film-maker. His first novel, Hand On the Sun (London: Penguin Books, 1983), dealt with the experience of the resistance to racism by young migrant to the UK of the 1970s and…

SPECIAL OFFER TO MARK US DEFEAT IN AFGHANISTAN : Song of Gulzarina + You’re Not Here for 50% discount: Coupon Code: usdefeatafghan

A suicide bombing is being planned in Manchester, UK. Behind it lie Saleem Khan’s vivid memories – some full of regret and yearning, others humorous and yet others overshadowed by the surreal brutality of war.

In the 1960s, he leaves his lover, his job as a teacher and his home in rural Pakistan and travels to Bradford, a town seething with racism where Asians are ‘Pakis’ and their labour is cheap. He finds a job working in a mill on an all-Asian night-shift, becomes an active trade unionist and, when the mills close down, he drives a taxi. He gives up his religion and eventually falls in love with an English woman.

But in the 1980s Pakistan draws him back. Now regarded as a smart ‘abroadi’, he gets involved as the English-speaking partner in his cousin’s transport business. When a truck driver he knows does not return to base, Saleem Khan sets out to find him and unwittingly gets drawn across the border and into the killing fields of Afghanistan. Here, among Russian soldiers, Saudi Arabian Sheikhs, American Pirs, prostitutes and the holy warriors of the Mujahadeen, who take their orders and weapons from the United States, he meets Gulzarina, the woman whose life and experiences in a war without end allow him to finally make sense of his own.

Tariq Mehmood has written a powerful tale and his voice in the current political climate is important. Through a strong sense of the spoken word, an under-heard narrative gains momentum. This book is pure entertainment but it is also a cautionary tale. A question embedded in a Song. What happens when people are ignored and suppressed for too long? Where does that energy go? It is the reader’s gain that this particular writer has put his own spark into Song for Gulzarina. https://muscattales.com/2016/11/21/speaking-in-bombs-book-review-song-of-gulzarina-by-tariq-mehmood/