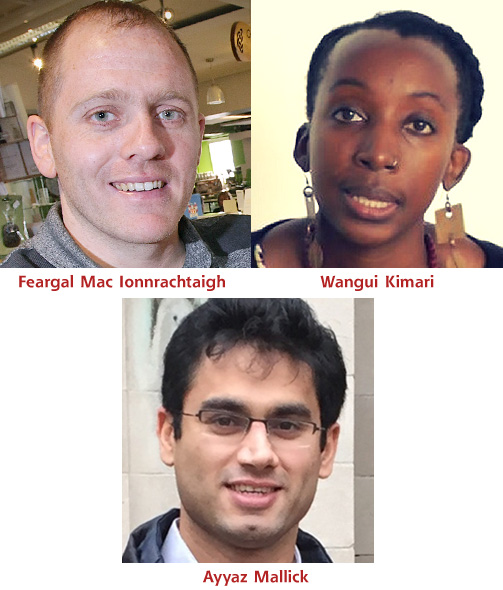 In this fourth discussion of Fanon Today: Reason and Revolt of the Wretched of the Earth (Daraja Press, 2021), Nigel C Gibson (editor) and Firoze Manji (publisher) will be discussing the relevance of Frantz Fanon today to struggles in Northern Ireland (Feargal Mac Ionnrachtaigh), Kenya (Wangui Kimari)  and Pakistan (Ayyaz Malik).
* Feargal Mac Ionnrachtaigh is a first generation Irish speaker and a product of the Irish Medium Education system in Belfast. He studied at Queens University Belfast and his doctoral thesis (2009) was pub- lished as a book, Language, Resistance and Revival: Republican Pris- oners and the Irish Language in the North of Ireland (Pluto). He is also the author of Féile Voices at 30’-Memoirs of West Belfast Community Festival Féile an Phobail (Orpen Press). He works full-time in the Irish language revival movement as Director of Irish Language youth and community organisation, Glór na Móna (www.glornamona.com) and is a prominent member of the An Dream Dearg Irish language rights grassroots campaigning network.
* Wangui Kimari is the participatory action research coordinator for the Mathare Social Justice Centre (MSJC) in Nairobi, Kenya. MSJC is a community space in the informalized settlement of Mathare, which seeks to promote social justice through engaged community and social movement platforms.
+ Ayyaz Mallick is a political worker of the Awami Workers’ Party from Karachi, Pakistan, a left-wing party focussed on organising workers, peasants, students, and women. He recently completed his PhD from York University, Toronto, and is currently a Lecturer in Human Geog- raphy at the University of Liverpool. His research interests are in Marx- ist and postcolonial theory with a focus on labour, urban politics, and social movements.
+ Razan Ghazzawi (she/they) is an exiled Palestinian-Syrian scholar- activist and an award winning human rights defender and blogger since 2005.  Unfortunately, owing to examination commitments, Razan will not be appearing this time, but we hope to have have on another shown in the near future.