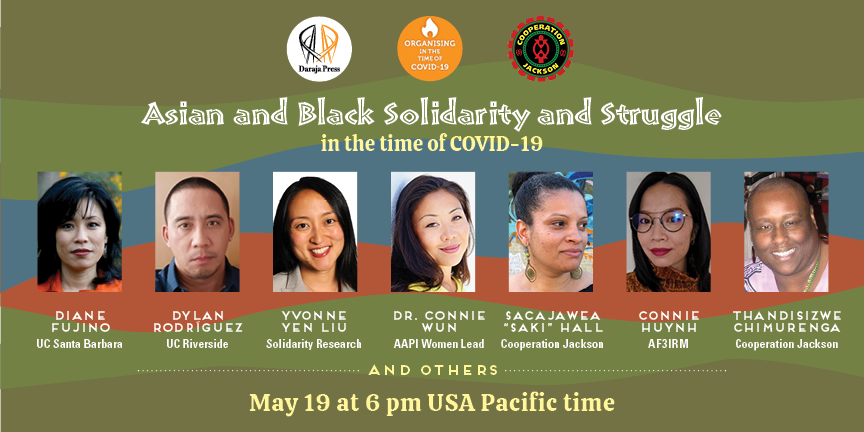 To mark the birthdays of Ho Chi Minh, Malcolm X and Yuri Kochiyama, we are organising a panel discussion on Asian and Black solidarity and struggles

Thandisizwe Chimurenga is currently a Board Member of Cooperation Jackson, Thandisizwe Chimurenga has been an activist, organizer and writer for more than 20 years on a variety of issues of importance to Black/NuAfrikan people. She is the author of No Doubt: The Murders of Oscar Grant (2014) and Reparations, Not Yet: A Case for Reparations and Why We Must Wait (2015), and a contributor to several edited works including Jackson Rising: The Struggle for Economic Democracy and Black Self-determination in Jackson, Mississippi. [picture needs cropping – she is the one on the right]

Diane Fujino is professor of Asian American Studies and former director of the Center for Black Studies Research at UC Santa Barbara. Her books include: Heartbeat of Struggle: The Revolutionary Life of Yuri Kochiyama; Samurai among Panthers: Richard Aoki on Race, Resistance, and a Paradoxical Life; and Wicked Theory, Naked Practice: A Fred Ho Reader (as editor). Her research examines Japanese and Asian American activist history within an Asian American Radical Tradition as shaped by Black Power and Third World decolonization.

Dylan Rodríguez is a Professor and former Chair of the Department of Ethnic Studies at UC Riverside. He was elected Chair of the UC Riverside Academic Senate by his faculty peers in 2016. He is the author of two books: Forced Passages: Imprisoned Radical Intellectuals and the US Prison Regime (2006), Suspended Apocalypse: White Supremacy, Genocide, and the Filipino Condition (2009) and he is co-editor of Critucal Ethnic Studies: A Reader (2016). His current thinking, writing, and teaching focus on how regimes of social liquidation, cultural extermination, physiological evisceration, and racist terror become normalized features of everyday life in the “post-Civil Rights” and “post-racial” moments.

Yvonne Yen Liu is the co-founder and research director of Solidarity Research Center, a worker self-directed nonprofit that advances solidarity economies for workers of color and subaltern populations. In addition, Yvonne teaches in the sociology department at California State University, Los Angeles. She serves on the boards of the US Solidarity Economy Network and Data Commons Cooperative, and the steering committee of the California Asset Building Coalition. Yvonne is the 2018 Activist-in-Residence Fellow at the UCLA Asian American Studies Center. Yvonne has over fifteen years of experience supporting racial justice and social impact organizations with quantitative and qualitative research. She is passionate about telling stories through words, images, or data to shift hearts, minds, and guts. Her writing has been featured in Colorlines, In These Times, and Yes Magazine.

Dr. Connie Wun is the co-founder of AAPI Women Lead, an organization that highlights the leadership as well as the issues of violence impacting self-identified Asian and Pacific Islander women and girls across the US and its territories. Dr. Wun has been working as an educator, researcher, writer, and organizer to end racial and gender based violence for more than 20 years. She is a research consultant and trainer for organizations and institutions across the US, including Survived and Punished and Girls for Gender Equity. She is a former community board member for the Prison Activist Resource Center, has been involved in prison abolitionist work for more than 20 years, and is a founding member of the Bay Area chapter of INCITE! Her work is deeply informed by her personal experiences, including being a former sex worker, survivor of violence, and a child of Vietnamese War refugees born in Oakland, CA.

Connie Huynh (she/her) is the national Chairperson of AF3IRM, an anti-imperialist, transnational feminist organization. She is a campaigner, organizer and strategic researcher and has led large-scale community and labor organizing campaigns for over a decade. By day, Connie is the national Health Care for All campaign director at a grassroots power-building organization, People’s Action. She is a mom all of the time, (despite the misnomers “second” and “third” shifts) and a descendant of multiple generations of people displaced by imperialist projects most recently from Viet Nam.

Sacajawea “saki” Hall is a radical black feminist, activist, mother, birth-worker, educator and journalist. Saki sees her life’s work as engaging in the collective struggle for African liberation, human rights and overall social transformation. She is a native Lower East Side New Yorker and has migrated to Jackson, Mississippi where she is a founding member of Cooperation Jackson. saki’s leadership within Coop Jackson includes strategic planning, cooperative development and financial planning, fundraising, communications and she anchors the development of the Fannie Lou Hamer Community Land Trust.

Firoze Manji, a Kenyan with more than 40 years’ experience in international development, health and human rights, is the publisher of Daraja Press (www.darajapress.com). He is Adjunct Professor at the Institute of African Studies, Carleton University, Ottawa, Canada and Associate Fellow of the Institute for Policy Studies in Washington DC. He is the founder and former editor-in-chief of Pambazuka News and Pambazuka Press / Fahamu Books and founder and former executive director (1997-2010) of Fahamu—Networks for Social Justice. He has published widely on health, human rights, development and politics, including editing books on China in Africa, on Amilcar Cabral, and on the popular uprisings in Africa.