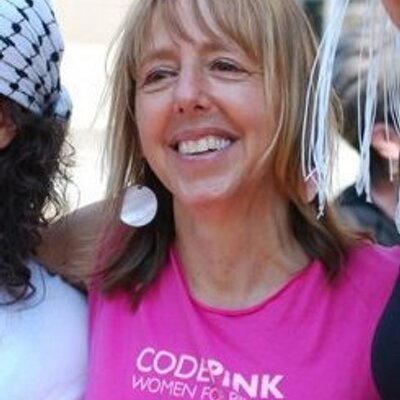 Medea Benjamin is an American political activist who co-founded Code Pink and, along with activist and author Kevin Danaher, the fair trade advocacy group Global Exchange. Benjamin was the Green Party candidate in California in 2000 for the United States Senate, receiving the highest raw vote total of any Green Party U.S. Senate candidate. In 2010, she received the Martin Luther King, Jr. Peace Prize from the Fellowship of Reconciliation. In 2012, she won the Marjorie Kellogg National Peacemaker Award and the Thomas Merton Center Peace Award. Also in 2012, she was awarded the US Peace Prize “in recognition of her creative leadership on the front lines of the antiwar movement.” In 2014, she received the Gandhi Peace Award from Promoting Enduring Peace “to honor her for her unyielding advocacy for social justice of more than 30 years”. She has campaigned tirelessly on Labor rights and corporate responsibility, Israel / Palestine, Iraq war, drone warfare, Afghanistan, World Trade Organisation, and many other issues.