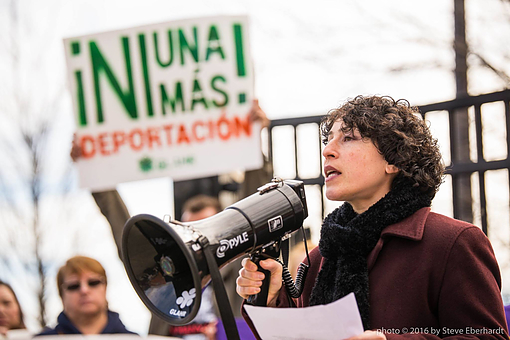 Reflections on imperialism, racial capitalism and resistance in light of COVID-19

I speak with Azadeh Shahshahani and Corrina Mullin. Azadeh and Corinna met each other while both participating in an NLG sponsored international solidarity delegation to Tunisia in the aftermath of the 2010-2011 revolution. Since then they have collaborated together on numerous projects analyzing and resisting imperialism and racial capitalism.

Azadeh Shahshahani, Legal & Advocacy Director, Project South. Azadeh has worked for a number of years in the U.S. South to protect and defend immigrants and Muslim, Middle Eastern, and South Asian communities. She previously served as president of the National Lawyers Guild and as National Security/Immigrants’ Rights Project Director with the ACLU of Georgia. Azadeh serves on the Advisory Council of the American Association of Jurists and on the Board of Directors of Defending Rights and Dissent. Azadeh has served as a trial monitor in Turkey, an election monitor in Venezuela and Honduras, and as a member of the jury in people’s tribunals on Mexico, the Philippines, and Brazil. She has also participated in international fact-finding delegations to post-revolutionary Tunisia and Egypt as well as a delegation focused on the situation of Palestinian political prisoners. She is the author or editor of several human rights reports, including a 2017 report titled “Imprisoned Justice: Inside Two Georgia Immigrant Detention Centers,” as well as law review articles and book chapters focused on racial profiling, immigrants’ rights, and surveillance of Muslim-Americans. Her writings have appeared in the Guardian, the Nation, MSNBC, USA Today, Aljazeera, and HuffPost, among others. Azadeh received her JD from the University of Michigan Law School where she was Article Editor for The Michigan Journal of International Law. She also has a Master’s in Modern Middle Eastern and North African Studies from the University of Michigan. Azadeh is the recipient of the Shanara M. Gilbert Human Rights Award from the Society of American Law Teachers, the National Lawyers Guild Ernie Goodman Award, the Emory Law School Outstanding Leadership in the Public Interest Award, the Emory University MLK Jr. Community Service Award, the US Human Rights Network Human Rights Movement Builder Award, the American Immigration Lawyers Association Advocacy Award, the Distinguished Leader Award from the Fulton County Daily Report, and the University of Georgia Law School Equal Justice Foundation Public Interest Practitioner Award, among several others. She has also been recognized as an Abolitionist by the Antiracist Research and Policy Center at American University & the Frederick Douglass Family Initiatives, and as one of Atlanta’s 500 Most Powerful Leaders by Atlanta Magazine. In 2016, Azadeh was chosen by the Mundo Hispanico Newspaper as an Outstanding Person of the Year for defending the rights of immigrants in Georgia. In 2017, she was chosen by Georgia Trend Magazine as one of the 40 under 40 notable Georgians.

Corinna Mullin is an adjunct lecturer in global studies and comparative politics at the New School and John Jay College. Prior to teaching in New York, she spent 5 years living and teaching in Tunisia, at the University of Tunis. She researches capitalism, imperialism and the politics/political economy of knowledge production and Global South security states, with a focus on Tunisia and anti/decolonial struggles.